The Brewtown Rumble is a ride-in vintage motorcycle show. It doesn’t matter the make, model or condition of the bike. It just matters that you ride it! Everyone is welcome – riders and motorcycle enthusiasts alike.
The Rumble also features live music, a pin-up show, vendors and food from some of Milwaukee’s best cafes, restaurants and food trucks.

Proceeds from the Rumble support the BUILD Moto Mentor Program. Come see the BUILD bikes in person, and see which team wins the BUILD Cup.

The sun is shining, ABATE of Wisconsin has a booth, there’s bikes, beer, food, and music. This is my third time attending the Rumble, and I have to admit I was a bit concerned by the bikes this year. Between years of Momma Tried and the Brewtown Rumble, I’ve already got pics of a lot of the bikes within riding/trailering distance of these Milwaukee events. I tried to take pictures of bikes that I haven’t shown before, but I make no promises.

As I mentioned, my main reason for being here was to help set up and work the ABATE of Wisconsin booth.

We had a lot of traffic and conversation, but something was missing. The same thing that’s always missing: people under 50 signing up to be members. I continue to marvel about the degree to which everyone involved in motorcycling at all is now grappling with the question of how to create the next generation of riders. More on that in a minute, first I had to stop next door and say hi to my Indian Motorcycle friends. 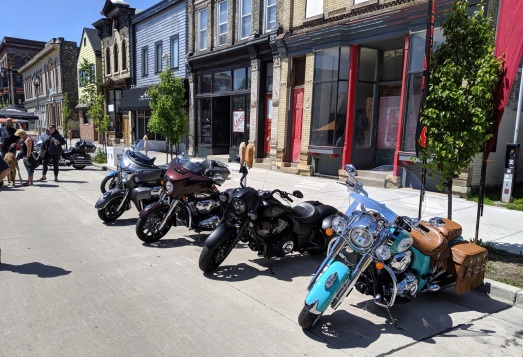 Does Royal Enfield Get it and No One else Does?

Across the street was the Royal Enfield lot. The got themselves a lot of space this year and I had to go check it out. 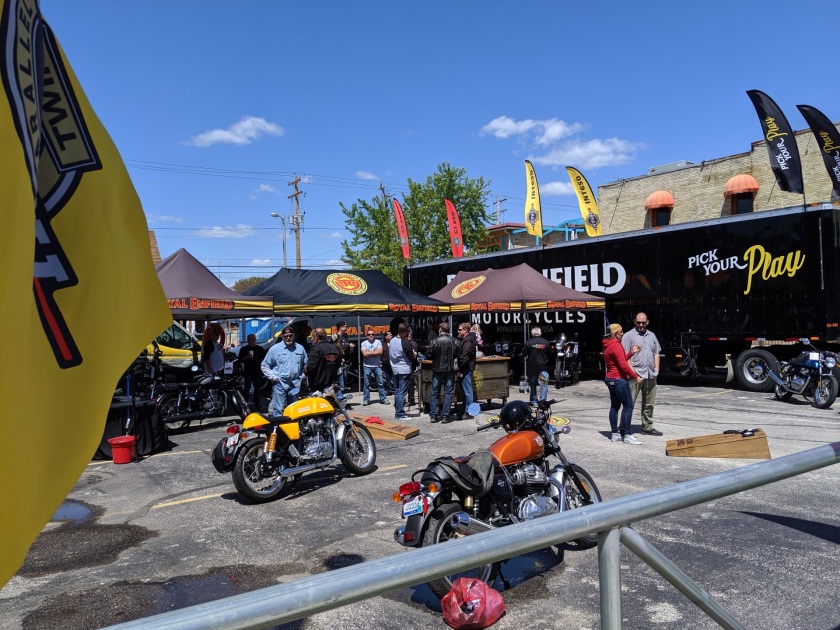 I do not get Royal Enfield. They are 1-cylinder bikes that ride funky to me. Who’s their target demographic? Are these retro bikes? Hipster commuter bikes? Bikes for dedicated Anglophiles who can’t get behind Triumph? I walked over and talked to a young lady who turned out to be involved with brand management and marketing for Royal Enfield’s North American headquarters. Within moments it became clear that she could teach things to me and perhaps others in the ABATE of Wisconsin crew.

Since she’s awesome and willing to talk to us, I’m going out of my way not to out her. The bottom line is that Royal Enfield is killing it, growing sales year over year at a time when most brands are struggling to slow down the decline. What have they figured out?

Royal Enfield has a story to tell that’s different from Harley or Indian. I don’t want to fuck up paraphrasing it here, so I’ll save my interpretation of their story for another time after I’ve been able to do more research.

I asked my guide if there were… certain stereotypes that I could guess about RE buyers. Did they also have man-buns, anachronistic curly mustaches, and perhaps have an affinity for mechanical typewriters, Polaroid cameras, and bizarre IPAs? She cut me off “Yes, it’s OK to say it: hipster boys buy these bikes”. These are 1 cylinder bikes with plenty of space around the main components: you can learn to work on these bikes easily. Royal Enfield has “shop days” in dealerships where interested folks can show up on weekend mornings and learn how to wrench on their bikes from certified mechanics: more on this later.

Royal Enfields are also inexpensive: my guide claimed that every single RE bike was under $7,000 and here’s an additional kicker: she claimed the bikes are nearly always naked on the showroom floor. There is no bait-n-switch or upsell where you fall in love with a bike on the dealer floor only to find that the beauty you’ve been talking yourself into buying is sporting thousands of dollars of extra parts. What you see is what you get and they hand you a catalog to make it your own. My guide quoted figures that are all to familiar: Millenials and Gen Z have student loan debt and credit card debt. They are less likely to own homes and start families than their parents and grandparents; their economic outlook is decidedly pessimistic. Being able to get a new bike with a great warranty for under $7k? Royal Enfield may be exploiting a great market niche.

My guide seemed a little confused: maybe thought I was drunk, hitting on her, angling for a photo, or any of the other bullshit that women have to deal with at trade shows. I explained that I was with ABATE of Wisconsin and that the question of reaching younger riders was something of an existential issue for us. I said I would really appreciate it if she had any advice for us.

ABATE of Wisconsin marketing badass Doris was primarily responsible for our being at The Rumble this day, I went back to her and said “You need to meet this individual.” Doris talked to her and this could be the beginning of a beautiful friendship: again, I don’t want to “out” anyone but this was a very productive day and I’m grateful.

When I come to events like this, I’m always energized. I try to figure out how to put into words whatever it is about this motorcycle culture that so captivates us. Those of us who are “into it” often wind up being really into it. It becomes less a thing we do and more who we are. I believe it’s less about the self reliance of wrenching on your own bike, and less about an excuse to drink beer and look at tatooed young people while a loud, obnoxious band plays.

I will talk more about this in the near future, but I believe the Fellowship of Those Who Balance on Two Wheels is simply a strong connection and shared experience, and we have reached a point in American history where those things are rare. No one at work understands why I’d want to ride from Milwaukee to Idaho – at the Brewtown Rumble I can talk to any random person in the crowd and they’ve either done a ride like that, plan to do a ride like that, or wish their knees were healthy enough to do a ride like that. If I talk about wanting to buy an offroad bike so that I can just leave the road, enter a national park, and truly disappear: every single person I talk to at least understands why even if it’s not “for them”.

It’s good to be among one’s people. It’s good to have people, to have a tribe. I used to have trouble making friends, and by most practical definitions I still do. But I do have people. Thanks to technology, I can enter the Internet and come out the other end with a group of fun bikers at a bizarre alien-themed bar in Campbellsport, WI 120 miles from home where the locals at the bar just down the road warned us to only drink from bottles and cans because “Those alien weirdos don’t do their dishes very well”. Me, a guy with all the social skills of a potted plant, could have burgers with Good People™ every single day of the week both during and after riding season. All because there’s something special about this motorcycle culture. Going to an event like the Brewtown Rumble is like a more intense version of “the wave” you get from another biker rolling past you. You are surrounded by your people, and that’s a good thing.

Maybe I’m full of shit. As the creator of This Motorcycle Life points out, there’s a would-be philosopher underneath nearly every motorcycle helmet. Maybe someone else has already said it better.

Of course, it’s a ride-in show and it’s always about the bikes. I don’t think I have taken pics of any of these bikes before, but I also didn’t go back and check. 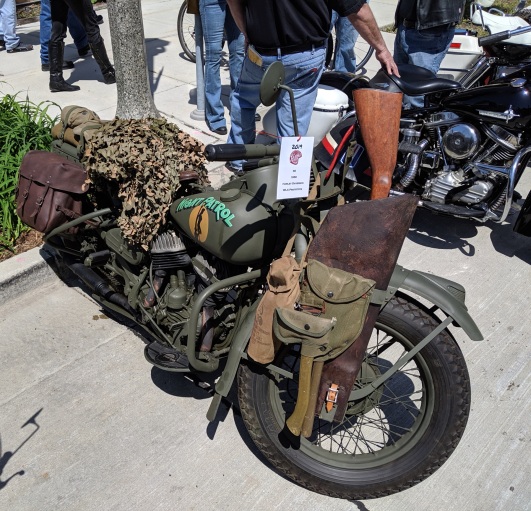 I thought maybe this was a zombie survival bike, but it’s for something a little more practical… 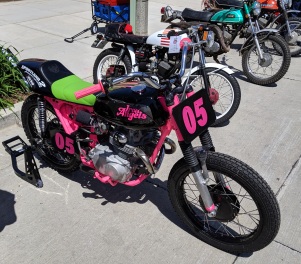 The Gold Wing has LONG been a force in American motorcycling. 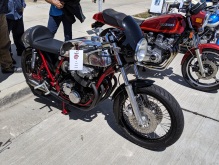 I feel like this must be Captain Phasma’s bike. 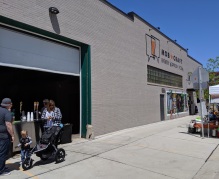 This wooden bike was interesting and I don’t know why 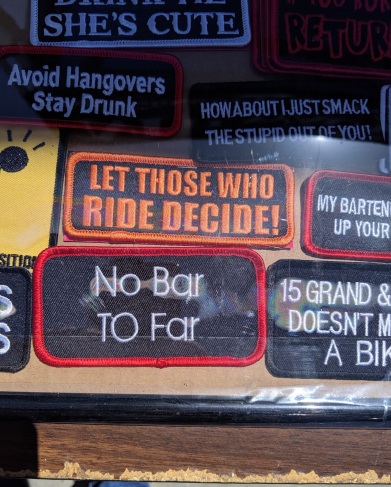 Bikers are not known for their grammatical prowess. 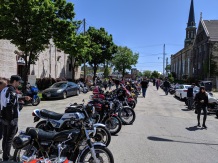 Every side street is full of bikes 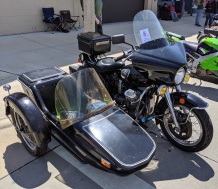 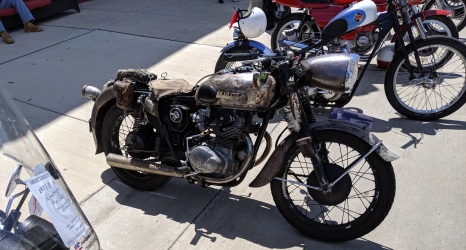 Sun and steel, a unique bike fit for the Zombie Apocalypse.

Orange bikes still reach out and grab me, this is a really hot chopper. 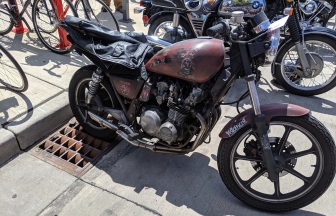 A raked out, retro trike with old school pillions. Hot!

Black Belt Theatre provided the sounds during the day.

If you follow Adam Sandoval, of course you’ve heard of The Ritas