Merle Haggard said it right: Mama Tried to raise me better. She busted her ass, yet here I am drinking beer, getting tattoos, and working the ABATE booth at Mama Tried 2018.

“Mama Tried Motorcycle Show is an indoor invitational that connects motorcycles and builders to fans and riders alike. Keeping the fire stoked all winter long. The Show features over 100 motorcycles from builders of all calibers—flat-tracker, hill climber, chopper, and bar hopper.”

Last year’s show was the best kind of dumpster fire. It was in an old warehouse on the Milwaukee River and it was unseasonably warm: even fair-weather riders road in.

I was sure this year would be calm and under attended by comparison. Not only was it actually cold, but the ancient and storied venue of the Eagles Ballroom is owned by an ancient and storied Milwaukee family that will never allow $2 cans of Pabst to be sold in their hallowed halls. No sir, beers were $7 and up. I was wrong about attendance: at times on Saturday the venue was at capacity: one person had to walk out before one person walks in.

I try to walk into this show with my wannabe-journalist hat on. My first question is for all the vendors: Hey you in the Vance & Hines booth: do you get enough action here to make it worth it for you? No matter how I asked the question, every vendor said yes. Every “biker lifestyle” clothing seller, accessory maker, and crew there to promote their own future event was happy with the the turnout and fan feedback.

Yes, every moto brand that’s been creeping on your Facebook wall was here. 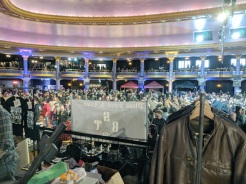 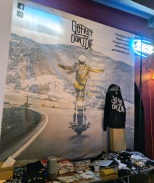 I just want to ride my bike. I tweak it some, I pay for parts or paint, I adjust my highway pegs. That’s me, but I can really appreciate the labor of love that goes into the custom bikes on the floor. There’s a lot of history and craftsmanship to admire. Just seeing the bikes is worth the price of admission. This is not the place to come look at the new Milwaukee 8 engine or Indian Chieftain. These are show bikes and bikes kept alive with pure love and willpower. 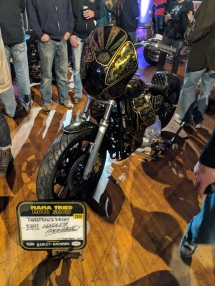 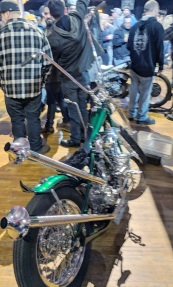 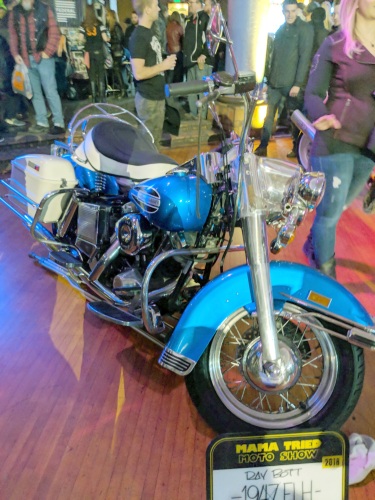 On top of the usual stuff, there’s some cool extras. The Build Moto guys have a great mission and they’re worth checking out. Milwaukee loves live music, we are home to one of the largest outdoor music festivals, so there’s always going to be a band at any event in Brew City.

Maybe Harley has found the new market it’s been looking for?

Working the ABATE booth, trying to get people to care about motorcycle rights, drinking some microbrews. It’s not a bad night. Of course it kicked my “When will the roads be clean so I can ride?” vibe up to 11, and that’s a big part of events like this. It’s the same with any kind of conference or gathering: you may learn something, you may meet people, you may buy something useful. What you really leave with, though, is a reminder of how much you love this. And if you’re the RoadRunner, you also sew a new patch on your vest. 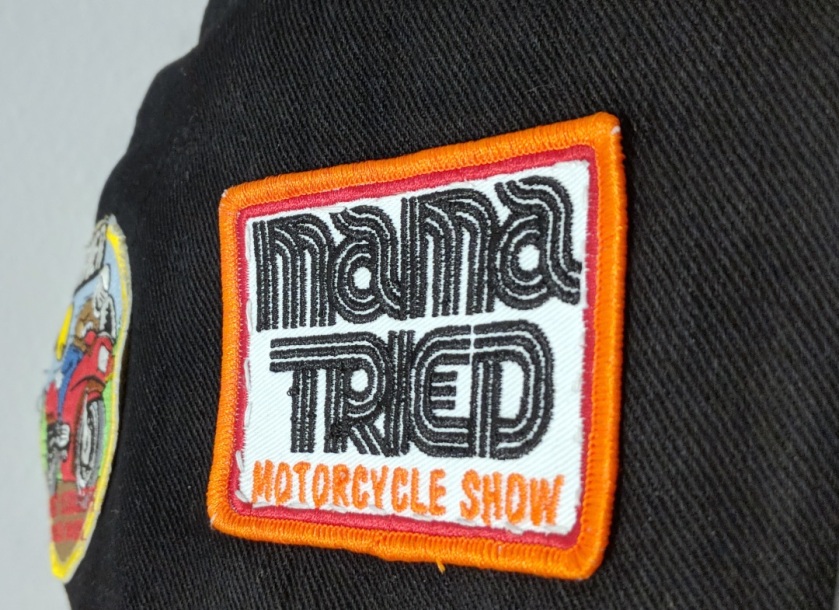 I am a fan of Victory Motorcycles. Others have talked about the reasons the brand is going away, so I don’t need to do that here.

I live very close to Milwaukee, my father and brother (der Bart) are Harley fans. Harley is an important employer around here. Harley does a lot for motorcycling. It seems I should be a Harley fan, and yet I never was. There’s a few reasons for that: around here, everyone has a Harley so I would hardly stand out from the crowd if I had one too. I was also concerned about quality and longevity. When people say “If your bike breaks down there’s people around to repair it” as a selling point, that makes me nervous.

I’m also an engineer by trade and so I care about engineer-type things more than your average buyer. That was part of me buying two Victory bikes: the Freedom 106 is a great engine. Victory didn’t have a Heritage crowd to make happy with a certain sound or feel, so they were free to just make a great American V-twin. The styling of Victory also spoke to me directly. I don’t love chrome, I don’t want a bike that takes any styling cues from the Heritage Soft Tail Classic. I like a blacked out bike and a bike that looks slightly more modern: keep the Harley “batwing” fairing and the Indian “sweep” of the front fender. If you have read this blog you know I take a lot of long trips, so the superior saddle bag capacity was appreciated.

My wife and I do well, but not “infinite money” well, so the price difference was a factor as well. Just for shits and giggles I built an Indian Cheiftan Dark Horse and a Road Glide Special, both 2017 Model Years. $7k more for a bagger set up the way I want it is a log of money.

I plan to ride Red Sonya (my 2015 Victory Cross Country) for a while still, but now I know my next bike won’t be a Victory. I somewhat wish I’d gone up to a Magnum X-1, but of course I thought the brand would be around for a while.

Hopefully Polaris and Harley learn from this, and the future holds better bikes. RIP Victory, we hardly knew ye.

It’s most likely about to get cold around here. I’m a shitty photographer, but hopefully you can see that Wisconsin does get beautiful in the fall. There’s a lot of great 2-lane around where I live.

Like many people, my father has a bucket list. On that list was a chance to see the synchronous fireflies in the Greater Smokey Mountains National Park. For a short while in June every year, photinus carolinus puts on quite a show. https://en.wikipedia.org/wiki/Photinus_carolinus 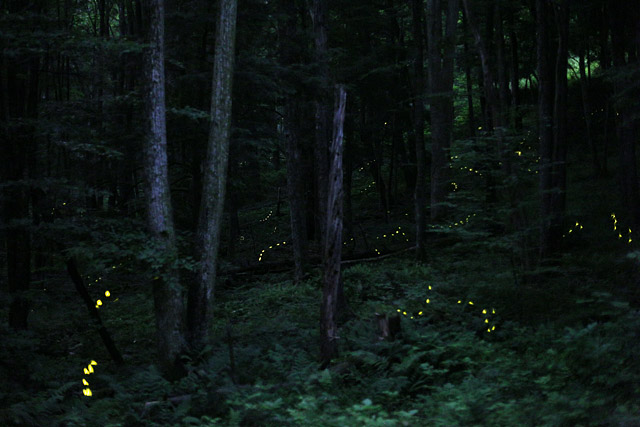 I had just started riding again after a too-long hiatus, traded my bobber in on a brand new bagger, and planned a trip.

Now in my circle of friends and family, I am the planner. I joke that if I weren’t setting up cookouts, movie nights, and bike trips, we’d never see each other. There can still be a lot of planning that goes into a week-long motorcycle trip. While at times it’s great to just pick a direction and ride that way, no one wants to be tired in the dark with no no place to sleep. I rented a cabin in Gatlinburg for a few days and gave us a very generous amount of time to get there. Myself, my brother, my father, and one friend set out from Milwaukee.

When you see motorcycle commercials on TV, you tend not to see the freeway system. You see two-lane roads, a couple of bikes, no civilization for miles around. You also don’t see people getting rained on. I’ll talk about both of these things in the future, but we got rained on a lot, and became very impatient with trying to avoid the freeway by the time we hit Indianapolis.

We stopped in Shelbyville, KY for no reason other than everyone is cheap and we found a coupon for a Ramada there in a Rest Stop magazine. Now this is a very clean place but they didn’t bat an eye when four dirty wet bikers roll in. In fact they had some kind of guest-welcome happy hour and handed us beers. The front desk staff didn’t even blink when I pulled out my griptilian to use as a Coupon Cutter on their desk. 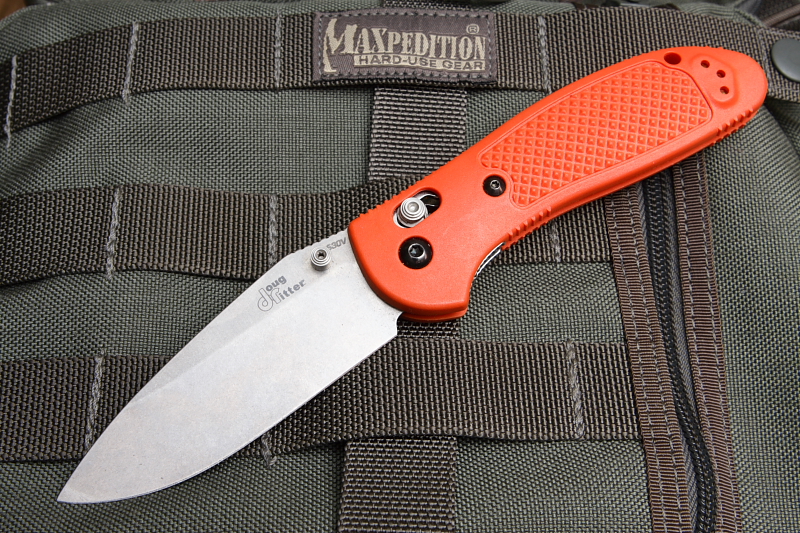 Now I like to tip a few beers back, but I’m very careful when riding. I really prefer finding a place where I can walk to get some suds once the bike is parked for the night. We lucked out with this place: it basically shares a parking lot with a movie theater, a Cattleman’s Steak House, and a liquor store well-stocked with Kentucky bourbon. If you’re ever on 64 through Kentucky, you could find a lot worse places to stay.

Also along 64 is the Kentucky Bourbon Trail, a place I plan to visit in the future. The next day we decided to get off the freeway again, and stumbled onto US 25 E somewhere in Tennessee, and completely by accident went through the Cumberland Gap Pass. If you’re on a trip towards the mountains, this is the kind of riding you were picturing. The scenery here starts to get extremely majestic. 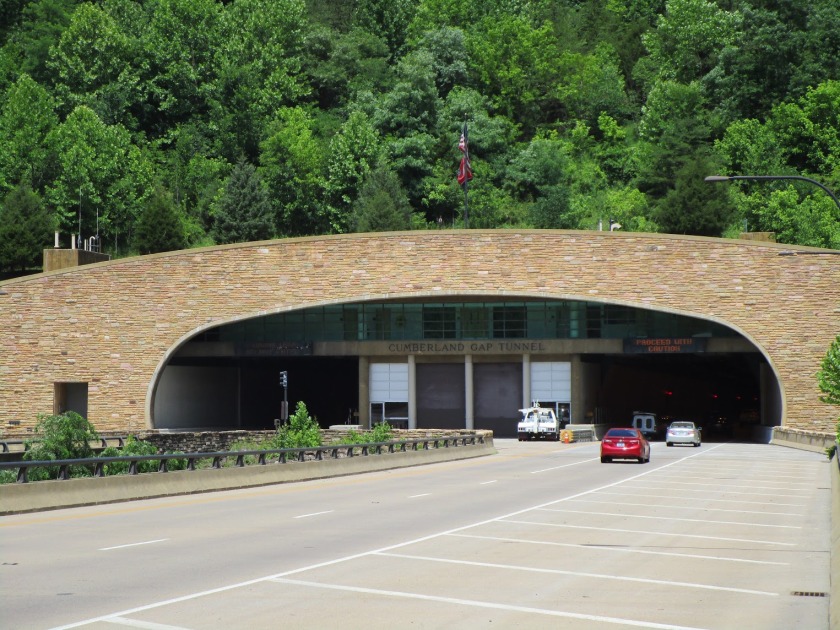 We got to the cabin and I nearly dropped my bike on the crazy switchback getting up the mountain to it. But it was a great stay, we even had a hot tub on the deck. Not really roughing it but after days of riding through the rain it was great.

Three Harley’s and a Victory in the mountains 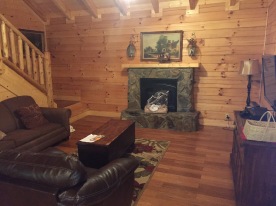 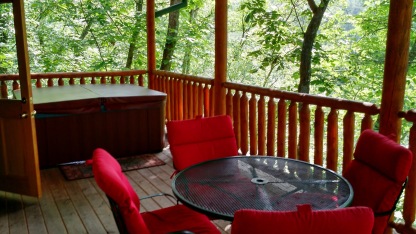 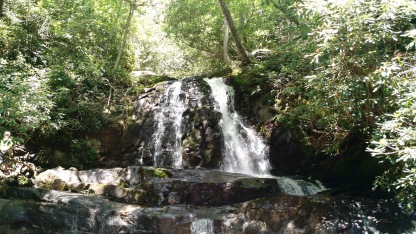 Everywhere I looked was a postcard

I pretty much always have to overdo it on food, even on the road. Above you can see the “smoker” I improvised with most of a roll of  heavy duty foil. Beer may have been involved. The park itself is stunning. Walking down any path, anywhere you look is worthy of a picture postcard. The fireflies were amazing, but my pictures didn’t turn out too well. You’ll have to go see them for yourself.

So did I find peace on the road? Yes. It turns out that the outdoors is pretty good for you. This may be a huge part of the experience, most of us probably just don’t get outside often enough. But this trip was a lot more than that. I rode on and off for nearly 20 years and never took a trip like this until 2015. I strengthened my bonds with my family, and formed a bond with this area of the country. I will go back as often as I can. Many people I met on the road or talked to back in Milwaukee say the same thing: there’s something truly special about this area of the country.

The story of synchronous fireflies in 2015 has a a bittersweet ending. When I came home, and I looked at the pictures of all of us on our bikes (taken with camera timer) I was really overcome by emotion.  I was so glad I got to do this with my father while he was still around and healthy that it was all I could talk about for a while. My wife also rides and so does her father. I told her she had to find time to do something like this with her dad, I recalled him talking about maybe riding out to the Badlands and Devil’s Tower. I actually said the words “Our parents aren’t going to live forever.”

I was asked to write and deliver the eulogy. I was proud of my words, but it was hard to get through.

A year later, a knee replacement caused my father to sell his beloved Heritage Soft-tail Classic. Work was extremely stressful at this time, several things almost caused this trip not to happen. We said fuck it and went anyway. It turns out this may be the greatest trip of all time because it was probably our last chance to ride with dad. Don’t wait. Get out there and ride while you still can.