My friend Harley Mark is often in a rough spot: Harley tends to unveil new stuff at the end of August. I’m planning big trips right around the time he’s working on top secret stuff for The Motor Company, so he’s stuck at work looking at my pics on Facebook. He missed the trip to Idaho.

Luckily Mr.s Roadrunner can be bribed, so for the cost of a 1 hour massage I got a 3 day weekend. I’ve been wanting to do the famous Hurricane Highway and the Tunnel of Trees in Michigan for a while. The last time I came through here it was an Iron Butt ride and there wasn’t time for anything but getting miles. The planned route looked like this: 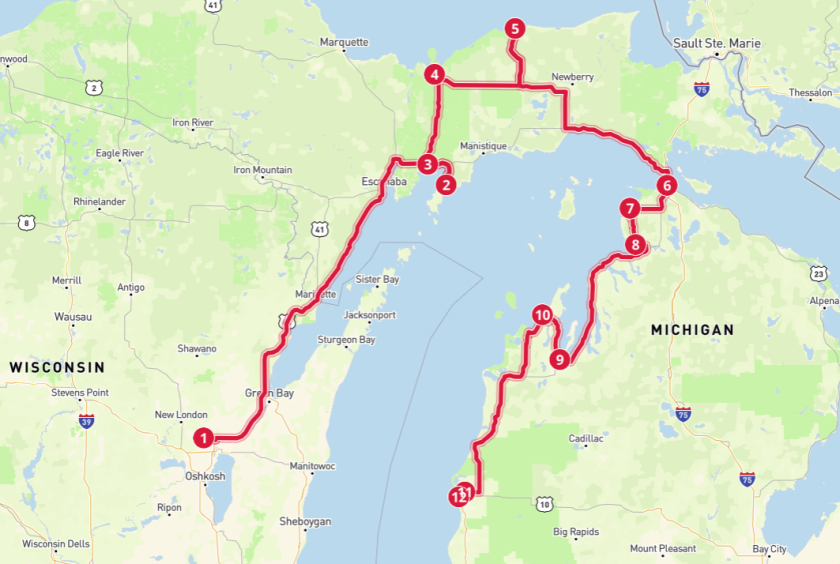 The fun you have when planning bike trips: since we had to leave after work on Friday, I want to stop in Escanaba, MI. There was a logging convention in Escanaba and every hotel within a wide radius was booked. We wound up finding an AirBnB in Garden, MI.

Like a lot of people, we have a “no chain restaurant” rule on bike trips. I’m seriously wondering if we can do a “no chain hotels” rule as well. I’ll miss the occasional hot tub but haven’t had bad luck yet with a small family-run B&B.

I was thinking that a Lake Michigan town on a Friday night would be jumpin’.
It wasn’t.

We got to our AirBnB, which at night looked like you could just as easily film a horror movie there as have a good sleep. The hosts were incredibly kind and helpful, but informed us that most things around were closed – we had crossed into Eastern time and the season was winding down. We did find a fantastic place that said they could still make us “anything fried”, so I had the first great night with Michigan microbrews and Walleye at Sherry’s Port Bar in Garden. People warned us about deer. Yes, we said, we’re bikers and we know to watch for deer. They insisted there were lots of deer. Yes, we said, we’re basically experts at bike touring.

We saw 16 deer on the 9 mile ride to dinner. We were extremely careful. 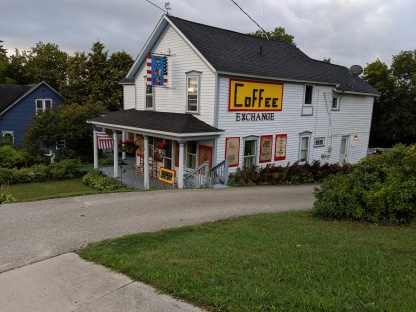 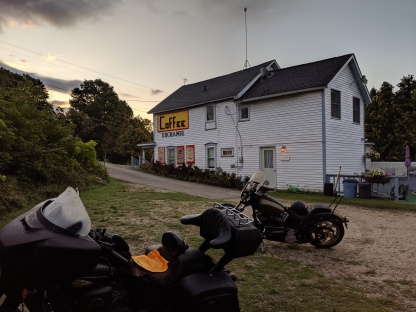 We got up and had breakfast pasties and great conversation with the owners and then prepared for a day with a lot of miles. We backtracked just a few miles and took a recently paved forrest road straight through Hiawatha National Forest, basically riding all the way north across the UP from Lake Michigan to Lake Superior.

Seeing the area around Garden during the day, I began to appreciate just how sparsely populated and wild the UP of Michigan is.  I also immediately fell in love with how the land looks, feels, and smells. This was like a quadruple dose of what I experienced riding to Tomahawk last year – the UP is wilder and more beautiful than Northern Wisconsin.

Doomsday prepping feels like it could be a fun hobby to me. While I’m not really worried about alien attack, the collapse of society, or a Zombie Apocalypse, having an off the grid cabin in the north woods sure seems like a lot of fun. Remote, and close to 20% of the world’s fresh water, you could do a lot worse than the UP.

Michigan H-58 “the hurricane highway” has been on my list to hit for a long time. It runs between Munising and Grand Marais along Lake Superior and it boasts some 300 curves depending on who you ask. It was a slow start, but by after a while I was repeatedly leaning the bike low at 55+ mph and I couldn’t stop smiling. Lake Superior is a great view as well. 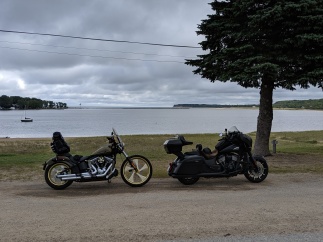 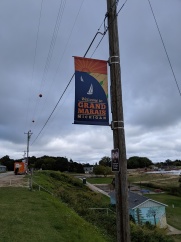 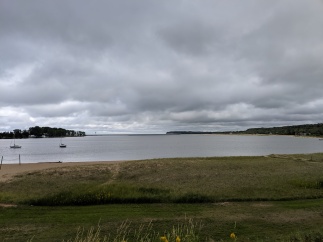 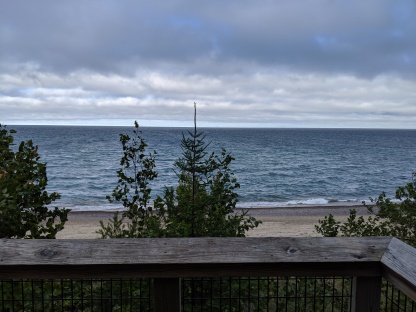 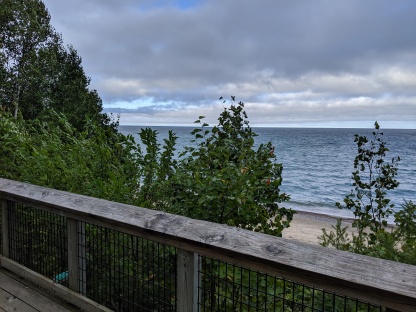 After leaving Grand Marais, we needed to head South and East and make it across Mackinac bridge into Michigan proper to get to the famous tunnel of trees road on the Western side of Michigan. As we headed East and looked for lunch, I found myself completely falling in love with Michigan. This place is wild and beautiful, and barely a day’s ride from home. I began… making plans…

Lunch was a fantastic local diner on the shore of Lake Michigan, and I caved in and had Walleye again, it was so damn good. 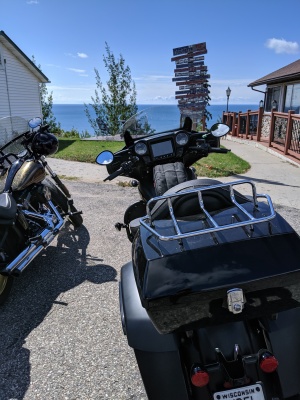 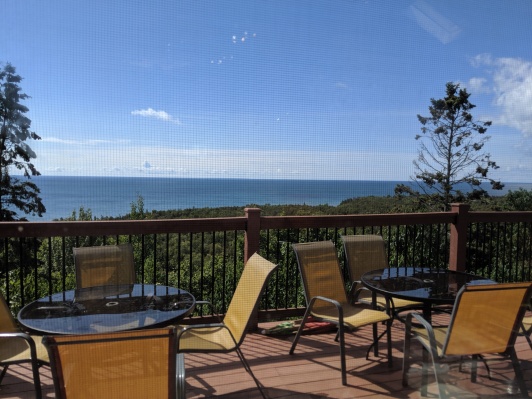 We stopped briefly after crossing the bridge at Mackinac in order to take pics in front of Lake Huron: our 3rd Great Lake of the day. 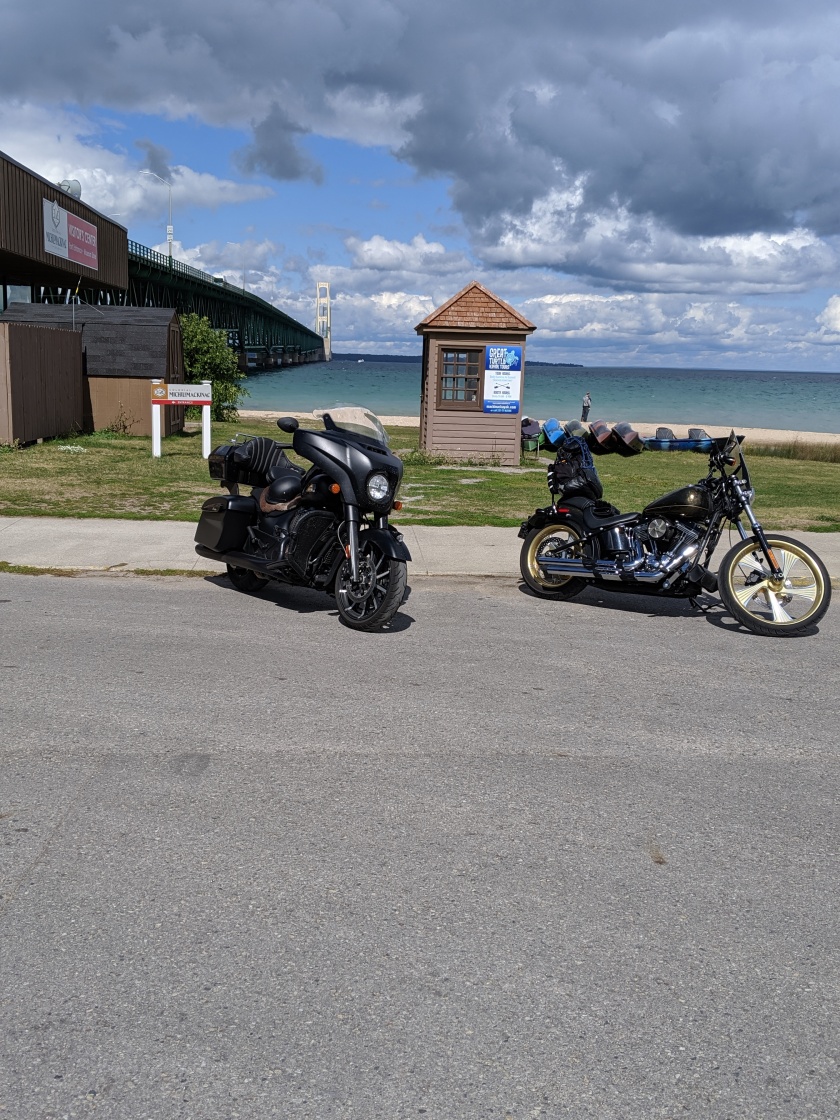 Whatever I was expecting, the tunnel of trees was not it.

It’s a two-lane road and much narrower than I thought, barely wide enough for a car and a motorcycle. The road is curvy and has enough dips and potholes that I found the speed limit (35-45) to be a bit laughable: especially given how little reaction time you’d have if meeting a car around a curve. Other than that, it was truly beautiful: a nearly closed canopy of leaves overhead, rustic homes, homes displaying outrageous wealth, and views of lake Michigan over my right shoulder as we headed South.

Getting through the tunnel of trees, I had planned to follow the coast all the way south to Ludington, which was the bed for the night. Given how far we had to go, and how late the bourbon had fueled the conversation the night before, we cut off part of the coast and headed for Ludington.

My goal was to take the ferry across the lake, partly for fun and partly to avoid Chicago. Ludington seemed to be a busy town as far as Michigan goes, and this time I wasn’t disappointed. We stayed at a hotel with an excellent hot tub: I can’t say enough about the healing powers of a hot tub on my middle-aged ass after a 700 mile day. We had dinner at the excellent Jamesport Brewing company, and they even sent us home with some tallboys to drink in the hottub back at the hotel. 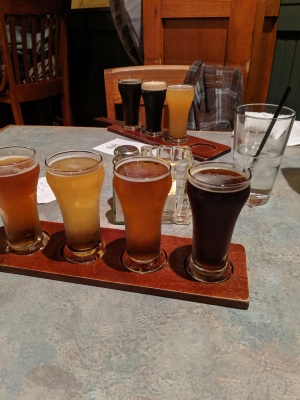 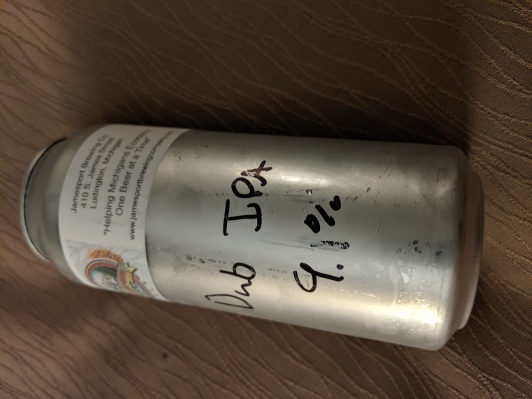 The SS Badger is an old, huge, coal-fired boat that runs between Ludington, MI and Manitowoc, WI just about every day until the lake starts freezing. It was a new experience waiting in a long line of cars waiting to get on the boat. The cars are valet parked by a crew, but bikes are ridden up into the boat by the riders. You ratchet-strap your bike to a grate on the lower deck, and then find stuff to do for the 4 hour trip. There’s bingo and movies and whatever on the boat, but we found entertainment in some bloody mary’s and microbrews and talking about rides past and future.

When you’re on the shores of the Great Lakes, or out on a boat, your body and mind realize that this might as well be the Pacific Ocean. It’s a little crazy that so many of us that live so close to the Great Lakes really don’t take advantage of them much. 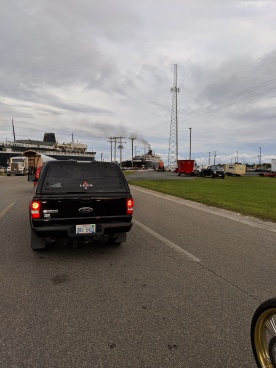 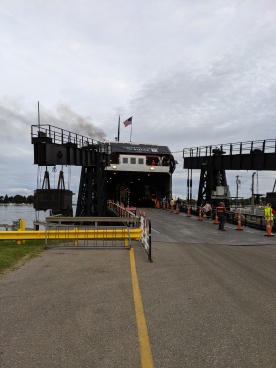 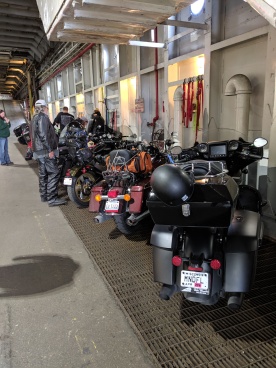 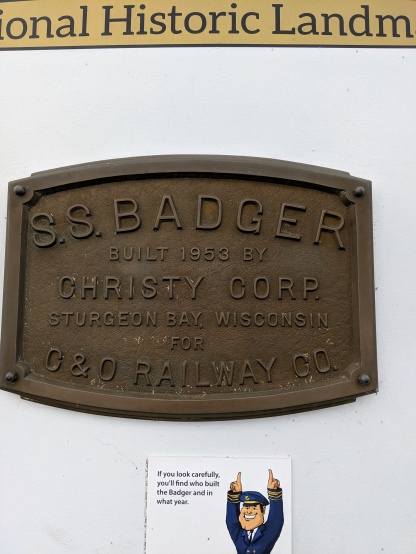 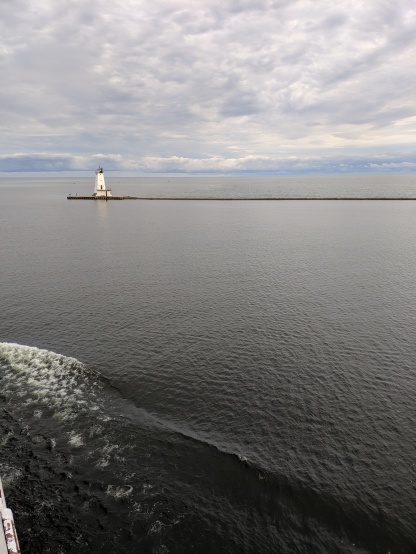 Being on a riding trip just puts you in a certain frame of mind. Harley Mark and I talked about our buddy Lefty, who wasn’t able to come on this trip at the last second due to a serious injury in his family. We talked about bikes, and our families, and trips we’d like to take in the coming years. When it was time to roll off the SS Badger, I was awash in the temporary peace that always comes from riding like this.

I’ve always wanted some land to have In The Family: I dream of an off-grid cabin with solar power, an outhouse, and a cast iron stove to cook on. I’ve looked in North Carolina, I’ve looked in Idaho. Given that family keeps me in Wisconsin and I’m not rich, the UP of Michigan makes a lot more sense. The wild, gorgeous, remote North Woods have really got me thinking.