I’ve been wanting a new bike since Victory was killed. I’ve come up with tons of reasonable-sounding justifications, like parts getting scarce and so forth. The reality is: who doesn’t want a new bike if they can swing it? There’s shiny new things like touch screen nav systems and loud new stereos. Bigger engines with more torque. I was determined to swing it this year.

I wound up riding Victory for the past four years for a few  reasons: I really liked how they were styled, they were extremely good values, and here around Milwaukee there are so many Street Glides I couldn’t bring myself to join that crowd: yes I wanted something different and as long as you’re not buying garbage or spending a fortune to prove a point that’s fine.

Someday I’ll think about why it is that I’ve never “gotten” Harley people, it’s just not a community that’s ever called out to me (I realize how loaded that statement is). They are expensive, and at least when I started riding in the ’90s, there was no dealing: this is the price, fuck you, there’s 11 guys behind you if you don’t like it. The Motor Company, however, has been doing a lot of good work. First, they are focused on building riders in addition to motorcycles and this is huge. They upgraded their infotainment; they engineered some of the vibration out of their new bikes. The Motor Company is moving forward, but are they competitive with folks who didn’t grow up lusting for the shield and bar their whole lives?

I decided to ride two bikes back-to-back. I cannot stand the “batwing” fairing on the Harley Street Glide, it’s too retro, it’s too much like a C5 Corvette. However the “Shark nose” fairing on the Road Glide is unique and excellent. If I was to get a Harley, it would be a Road Glide.

As for Indian, I recognize that I was giving Polaris another chance to screw me over. Still, when they started offering bikes without the front fender sweep and came out with their new Ride Command system, I had to try one.

First I headed to Milwaukee Harley Davidson to ride a 2019 Road Glide Special in Denim Red. If possible, I would get the burnt orange color shown at the top of this post.

The last Harley I rode was the 103 engine, and it shook, a lot. I know this is part of the appeal for a lot of people but it just wasn’t for me. I’ve also long preferred the blacked out look to the chrome look; I could say I liked this “before it was on-trend” as Harley marketing says, but the reality is the first blacked out bike I ever saw was the now-extinct V-rod Night Rod. Not good for long trips, but this bike forever changed my mind on how a motorcycle should look. The 2019 is a much more refined experience, very little vibration. While it took me a minute to get used to drive-by-wire, I found this bike to be powerful and enjoyable despite what felt like a lot of weight compared to my Victory. It was easy to pair my phone with the Boom system so I could hear some familiar tunes on the new radio.

Given what I had heard about the 114, I expected the engine to tear my head off with power, but it didn’t. Don’t get me wrong, it was very powerful with low end torque and plenty of get up and go all the way through the RPM range. I think word-of-mouth had just left me with expectations that couldn’t be met. Still, a great bike anyone would be happy to own.

I got a number for my trade in and discovered that it would only take them two weeks to get the burnt orange color in.

Next I headed to Indian Motorcycles of Metro Milwaukee to ride a 2019 Chieftain Dark Horse. My buddy Corvus came with me since he’d never ridden an Indian before. 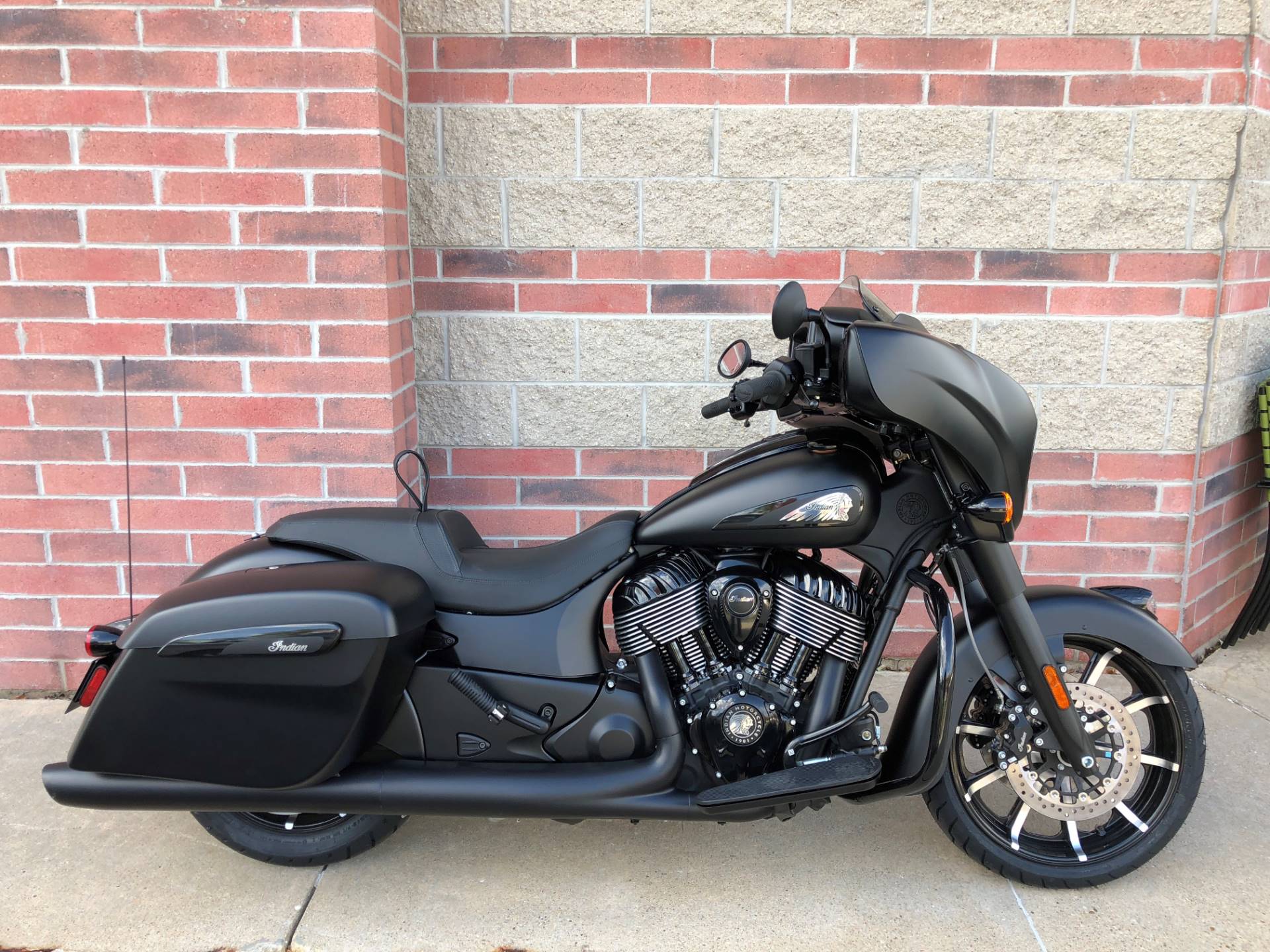 Fixed fairing vs. fork mounted fairing. Harley vs. Indian. How were they different?

Firstly, despite tipping the scales at very similar running weights, the Chieftain is a little lower and it makes it feel lighter than the Road Glide. I’m 5’9″ and this bike felt more maneuverable to me.

Secondly, in “standard” ride mode the ride by wire on the Chieftain feels even more twitchy than the Road Glide and I never got quite used to it.

From the handling perspective, the Chieftain felt much more nimble. It corners like a cloud, and felt natural and controlled through roundabouts. The suspension was also fantastic: Wisconsin roads are generally terrible but even going over railroad tracks was very easy going.

Finally, I do think the RideCommand is a little bit better, and the 100watt stereo has power power than I’ll ever need even at 80mph in the rain: most songs are too loud at 3/10 on the volume dial.

So what did I decide?

In the end, the feel and the ride of the Chieftain Dark Horse was clearly the right ride for me, and I rode it home. My 2015 Victory Cross Country, whom I affectionately called Red Sonya, is no more. Say hello to Black Sunshine.

She’s totally stock for now, as I fight a cold Wisconsin “spring” for break-in miles. The exhaust and engine sound so good stock I don’t think I’ll be messing with it for a while, but a bigger windshield, back rest, highway pegs, etc. will be on the way soon.

4 thoughts on “A Tale of Two Test Rides”