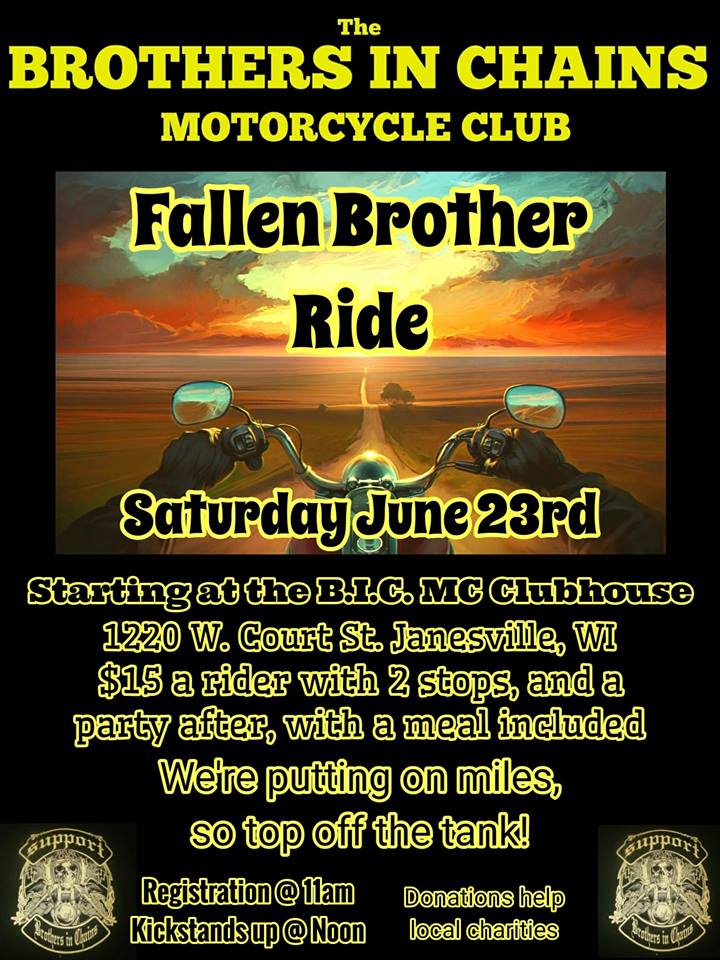 Many people, in many different situations, wind up visiting the final resting place of a fallen brother.  I do not mean a brother of the road, an MC, or an armed forces brother. This is my flesh and blood, my biological brother that I grew up with. He was also my riding buddy for sure though: life on two wheels figured heavily in our lives and our relationship. The one person I could count on for any number of miles in any weather, whether there was a bed at the end of the road or not.  I cope as best I can: writing letters to someone who can’t hear me. Words for the dead is salve for the living. Name it to tame it, feel it to heal it.

It has been one year since I found you dead in your home. I have promised myself and others I would say no more than that.

It took me a long time to visit your grave. I put you in the ground with our sister, but I had not been back. We visited on Memorial Day, and I feel as though you would have appreciated the flags. I had not cried in quite a while, and I didn’t think I would cry today; when I saw your name on the ground, though, I broke down. I often observe how well my wife has handled the loss of her father by comparison: he was the deepest most meaningful relationship in her life but she is mostly OK. We walked by Tom’s grave to get to you, I feel like being close to Tom is something you’d like.

I have made a few gestures to you. I have an “RIP Jason ‘Bart’ Payne” patch on my vest. I feel like the bike rides had become so important to you that this would be the only way you’d want to be remembered. I have also ordered a couple of rings that I think you’d like: black tungsten with green Celtic designs in the center band; I don’t know if it’s possible yet but I’m trying to get them engraved for Lani and I to wear in your memory.  I’ve also written you a couple of letters. You’ll find them here on this site.

Just now on June 23rd, the exact one year anniversary of your exit, I rode and partied with the Brothers in Chains MC out of Janesville, WI. They are good people who put on a good safe ride. Of all the rides going on, I felt called to do that one. Somewhere, on a wall in an MC clubhouse, is a hand written record that Damon “RR” Payne was riding for you that day.

Not everything is great, of course. Marc dropped your bike on his way to sell it, he hit his head and didn’t know who he was for a while: he blamed himself for forgetting about the new rear tire and fishtailing in the rain. I blamed you. He never should have been on your bike. Adam, I think, is also missing the discipline of his dad. He’s still doing super well in school but he’s not respecting people the way he used to. His mom says he walks around the house with his helmet on, I know I need to take him riding. Soon. For various reasons it has to be me, and that’s OK. I’ll be there for him.

I think about riding in your car and listening to the Dropkick Murphy’s “The Green Fields of France“. The sadness of that song, looking down at a grave, wondering what kind of life the man would have had. I know what that’s like now. It’s not fair that I’m planning these rides without you. It’s terrible the burden of guilt that you’ve placed on Mom. I think about how you’d react to me training for the Hoka Hey or saving to buy land for a cabin. This too shall pass. Talk to you in a year.

One thought on “Visiting and Riding for a Fallen Brother”